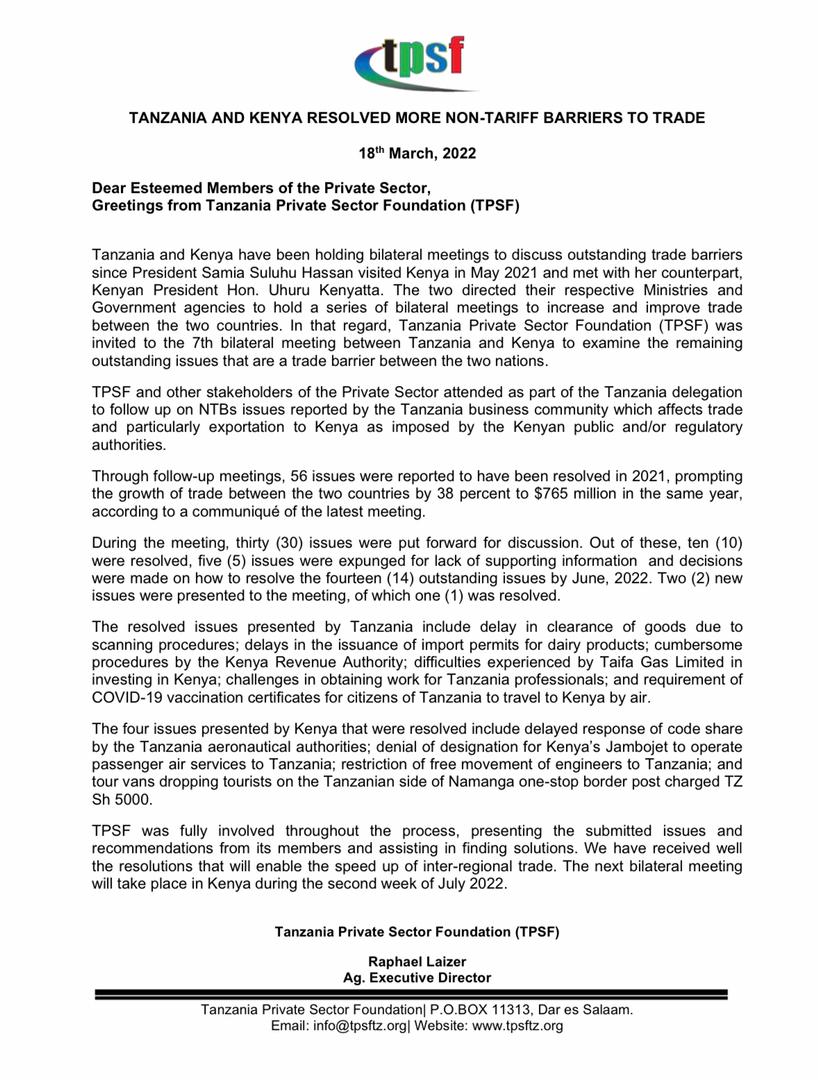 Tanzania and Kenya have been holding bilateral meetings to discuss outstanding trade barriers since President Samia Suluhu Hassan visited Kenya in May 2021 and met with her counterpart, Kenyan President Hon. Uhuru Kenyatta. The two directed their respective Ministries and Government agencies to hold a series of bilateral meetings to increase and improve trade between the two countries. In that regard, Tanzania Private Sector Foundation (TPSF) was invited to the 7th bilateral meeting between Tanzania and Kenya to examine the remaining outstanding issues that are a trade barrier between the two nations.

TPSF and other stakeholders of the Private Sector attended as part of the Tanzania delegation to follow up on NTBs issues reported by the Tanzania business community which affects trade and particularly exportation to Kenya as imposed by the Kenyan public and/or regulatory authorities.

Through follow-up meetings, 56 issues were reported to have been resolved in 2021, prompting the growth of trade between the two countries by 38 percent to $765 million in the same year, according to a communiqué of the latest meeting.

During the meeting, thirty (30) issues were put forward for discussion. Out of these, ten (10) were resolved, five (5) issues were expunged for lack of supporting information  and decisions were made on how to resolve the fourteen (14) outstanding issues by June, 2022. Two (2) new issues were presented to the meeting, of which one (1) was resolved.

The resolved issues presented by Tanzania include delay in clearance of goods due to scanning procedures; delays in the issuance of import permits for dairy products; cumbersome procedures by the Kenya Revenue Authority; difficulties experienced by Taifa Gas Limited in investing in Kenya; challenges in obtaining work for Tanzania professionals; and requirement of COVID-19 vaccination certificates for citizens of Tanzania to travel to Kenya by air.

The four issues presented by Kenya that were resolved include delayed response of code share by the Tanzania aeronautical authorities; denial of designation for Kenya’s Jambojet to operate passenger air services to Tanzania; restriction of free movement of engineers to Tanzania; and tour vans dropping tourists on the Tanzanian side of Namanga one-stop border post charged TZ Sh 5000.

TPSF was fully involved throughout the process, presenting the submitted issues and recommendations from its members and assisting in finding solutions. We have received well the resolutions that will enable the speed up of inter-regional trade. The next bilateral meeting will take place in Kenya during the second week of July 2022.

Member of the Month

This website uses cookies to improve your experience while you navigate through the website. Out of these cookies, the cookies that are categorized as necessary are stored on your browser as they are essential for the working of basic functionalities of the website. We also use third-party cookies that help us analyze and understand how you use this website. These cookies will be stored in your browser only with your consent. You also have the option to opt-out of these cookies. But opting out of some of these cookies may have an effect on your browsing experience.
Necessary Always Enabled
Necessary cookies are absolutely essential for the website to function properly. This category only includes cookies that ensures basic functionalities and security features of the website. These cookies do not store any personal information.
Non-necessary
Any cookies that may not be particularly necessary for the website to function and is used specifically to collect user personal data via analytics, ads, other embedded contents are termed as non-necessary cookies. It is mandatory to procure user consent prior to running these cookies on your website.
SAVE & ACCEPT