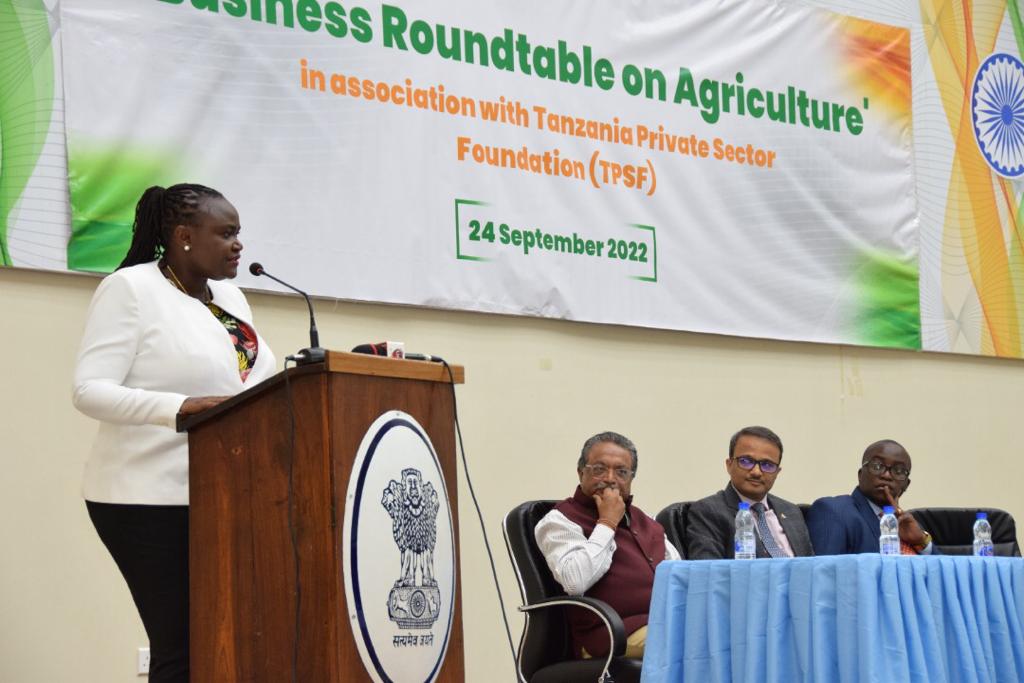 On 24th September, Ms. Angelina Ngalula, Chairperson of Tanzania Private Sector Foundation (TPSF), addressed the private sector community from Tanzania and India at the strategic Business Roundtable on the Agricultural Sector hosted by H.E Binaya Pradhan, India’s High Commissioner in collaboration with TPSF. The event, which was attended by Hon. Anthony Mavunde, Deputy Minister of Agriculture as the guest of honor, was aimed at exploring Tanzania’s diverse agricultural potential and establishing partnerships and collaborations with Indian representatives to realize the country’s agenda 10/30 on increasing agricultural productivity.

“Tanzania’s market for tractors consists of 1,000 units per year, while South Africa’s market sells around 4,000 units each year. Considering the extent of Tanzania’s territory, we should import more. We do not manufacture tractors in Tanzania; thus, we need investors to import tractors or establish an assembly line in Tanzania that will serve both the EAC and SADC region.” She added. She also emphasized that Tanzania’s business community is willing to collaborate with Indians to enhance the agricultural sector.

“Since agriculture is the primary source of income for around 65 percent of Tanzanians, the agenda intended to achieve an excellent 10 percent annual growth rate for the industry by 2030,” he added.

Expanding extension services is one of the “Agenda 10/30” campaign’s cornerstones. The present growth rate is between 2% and 4%, whereas the government’s five-year development plan anticipates a growth rate of 5.7% by 2025. The government is hopeful that agri-business can tackle youth and women unemployment, relieve severe poverty, and substantially contribute to the nation’s gross domestic product (GDP).

TPSF director of policy Advocacy and Membership Management, Mr. Zachy Mbenna gave a vote of thanks on behalf of the TPSF Secretariat by thanking the Indian High Commissioner, Mr. Binaya, and the High Commission for hosting the event, the Indian delegation for their willingness to partner and transform the agriculture sector in Tanzania.

Member of the Month

This website uses cookies to improve your experience while you navigate through the website. Out of these cookies, the cookies that are categorized as necessary are stored on your browser as they are essential for the working of basic functionalities of the website. We also use third-party cookies that help us analyze and understand how you use this website. These cookies will be stored in your browser only with your consent. You also have the option to opt-out of these cookies. But opting out of some of these cookies may have an effect on your browsing experience.
Necessary Always Enabled
Necessary cookies are absolutely essential for the website to function properly. This category only includes cookies that ensures basic functionalities and security features of the website. These cookies do not store any personal information.
Non-necessary
Any cookies that may not be particularly necessary for the website to function and is used specifically to collect user personal data via analytics, ads, other embedded contents are termed as non-necessary cookies. It is mandatory to procure user consent prior to running these cookies on your website.
SAVE & ACCEPT